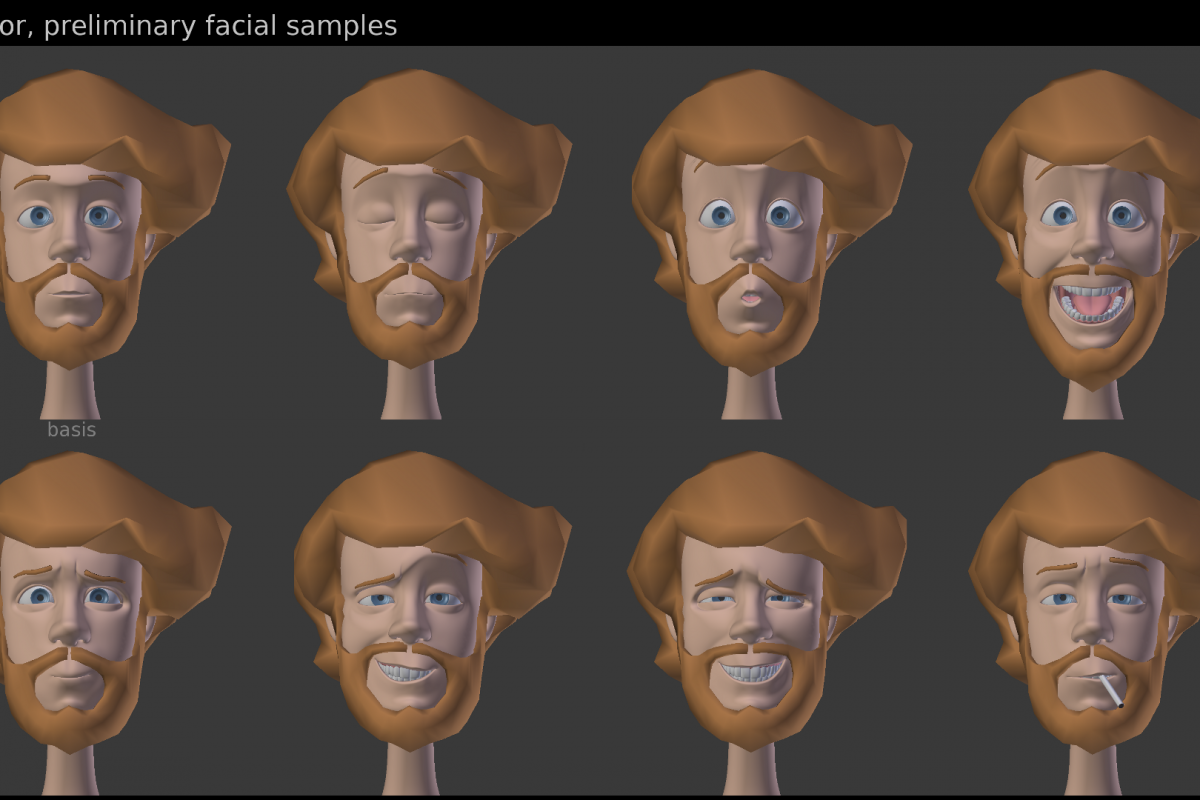 Gooseberry Character Modeler Angela Guenette has spent the past months building models for all the Cosmos Laundromat characters from her studio in Montreal. Now that all the character models are finalized, Angela would like to share with all of you her process…and also her experience of what it’s like to be a part of the Gooseberry project from a distance.

I started by collecting all the background information available to me, studying the approved 2D concept drawings, mood boards, and live references. It’s especially important to read the script and to fully review the storyboards. Victor, Franck, and Tara have character bibles/psychological profile sheets that also include a list of actors who have played specific roles in other movies as inspiration references. These are all very helpful for me to learn about each character’s role, motivation, and performance in the film.

With all creative decisions already set at the Blender Institute, I worked closely with Sarah, who was my main channel of communication, to model each character as specified.

We discussed direction using a variety of methods:

In this film, we have to set up a scale for two separate worlds and their characters to determine the size of the characters in relation to each other and the world around them.

2nd World: 1 blender unit = 10 cm
The scale was adjusted during layout animation until the preferred scale was reached. This scale was then updated on the final model. Example of the finalized facial topology for sheep Franck and Victor.

Requirements: The film’s main character is pathetic and proud, a hornless ouessant sheep. The male ouessant measures around 49 cm (19”) tall at the shoulder. Although Franck the Sheep is covered in thick wool, it’s important he looks correct underneath it all. At one point in the movie, for instance, he’ll be stripped of his wool while travelling through the tornado.

Franck the Sheep in 2D Final model: Proxy wool geometry is created to help define the design in terms of volume and silhouette, and can also be used as guide for the grooming stage. Facial topology: Before and after.

Teeth requirements: Realistic looking, hybrid referencing between a real sheep’s triangular-shaped teeth and a human set of top and bottom teeth, with a slight under-bite to coincide with protruding bottom lip. Needs to look subtle enough, not too weird for close-ups, and be workable for facial expressions. Requirements: Human secondary character with a jacket that needs to open for Victor to reach into. The body geometry underneath clothing (torso, arms, legs) is deleted to reduce animation collision and polygon count.

2D designs with body proportions reworked. Plus concepts for the ears and face contouring underneath the beard.

Design changes: After seeing the animatic, it was apparent that the design wasn’t translating well into 3D; Victor looked too exaggeratedly thin. A thicker silhouette was created. Also, the hands were scaled down 10%. Final model: Proxy hair geometry created to help define the volume and silhouette of the hairstyle, beard, and eyebrows, which can also be used as guide for the grooming stage. Facial topology: before and after. Testing out forehead and furrow topology for crease definition. Teeth requirements: A nice, perfect, full set of realistic human adult teeth, including wisdom teeth. (To be made imperfect later in grooming.)

Whether the face is deformed using bones or blendshapes, properly flowing edge loops are crucial for facial rigging and animation.

With character facial expressions being bone-deformation-based (not blendshapes-based), Ton asked me to create a few facial shape examples for Victor to be used as a reference.

I created a few preliminary poses using shape keys. Some of the shapes are pushed further for clear readability in distance shots, which can be easily dialed down for subtlety in close up shots. Initially Franck’s caterpillar face was sort of a morph between his sheep face and a caterpillar. As modelling progressed, it was decided that Franck must be instantly recognizable when transformed into a caterpillar, not only through his eyes but his facial features and proportions as well. To achieve this facial recognition, I used the eyeballs, interior mouth geometry, and face from Franck’s finalized sheep model, then re-attached them to fit the caterpillar’s shorter face. Teeth requirements: Human-like teeth with subtle feminine tapering-in towards the inside of mouth.

Requirements: This is Franck the Caterpillar’s motofly vehicle; Franck will wrap his body around dragonfly’s tail and use the eyes as handlebars. Layout model (above), Final model (below)

I also recorded a timelapse showing the modelling process for Dragonfly layout model!

Layout model: Another method to receive feedback is to create a few variations for review. “C” was approved (left). Grease pencil was used to communicate how the leg should be extended (right). Unfortunately, it was decided to cut the scenes with the frog (named Blinky by Daniel).
Image courtesy of Matias Mendiola. RIP Blinky.

Working on a team project remotely can feel a bit isolating, but IRC helps recreate the background discussions that happen in an animation studio environment, and gives a general idea of what everyone else is doing.