A Trip to the Dunes

Hey there! Last sunday I decided to take our crew on a little field trip to the sand dunes of the Zuid-Kennemerland National Park, a beautiful area on the coast west of Amsterdam. We needed to gather some references for the island at the beginning of the movie, as well as textures for the environment. […] 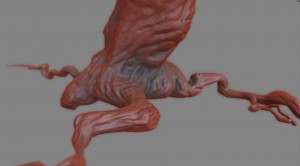 Remember Manu’s tree model from the December 12, 2014 weekly? Andy has been sculpting in all the details. Better yet, he’s provided a timelapse of his sculpting in action (an hour and a half condensed into 17 minutes) AND notes on what he’s done below. Enjoy!     Andy’s Notes   For sculpting, the Multires […]

Friday Afternoon in the Blender Institute Believe it or not, Friday is one of the most intense working days of the week here in the Blender Animation Studio: everyone is always rushing to prepare new graphics, renders, and demos by 6pm so they can show all of you how they spent their week during the YouTube livecast. However, that doesn’t mean we don’t find […]

Hi again, Manu here. Victor looks so finished now that Andy had the possibility to help us with the Franck’s grooming and shading, to really push it to the next level (with Lukas’s new hair features, of course). I started to work on environment again, and noticed Andy had made a very helpful procedural shader […]

The weekly livecast closing out the first month of 2015 was packed with both people and work…lasting a full hour and 14 minutes without showing a new version of the film. As always, you can catch up on the full livecast below, or you can continue on to the highlights and skip to the parts […]

Hello all! It’s Manu here; this is my first post. :) We Gooseberry artists are actually supposed to submit blog posts and tutorials a couple of times per month or so. However, because of the intense concentration on the first-priority tasks, there hasn’t been much activity on that front, at least from me. But that […]

Artists at Work (and making the video) 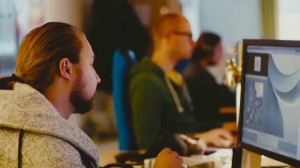 Cosmos Laundromat director shows off all the intense artistic work going into the pilot in the Blender Animation Studio today in his new video edit. Feel the concentration. Featuring (in order of appearance)… Manu Järvinen Andy Goralcyzk Beorn Leonard Francesco Siddi Pablo Vazquez Sarah Laufer The Blender disco ball This video was, of course, made […]

In the last weekly you got a glimpse of Hjalti‘s first lipsyncing test of Victor’s new rig. Some of you wanted to know how long this shot took him to animate. The answer is approximately 2.5 days. Obviously, initial tests like this take a little longer as Hjalti learns about the rig and consults with […]

On a moody Monday morning, an atmospheric fog settled over Amsterdam…and Cosmos Laundromat director Mathieu Auvray thought to himself: “This reminds me of Franck’s sheep island!” So he took advantage of the misty weather to capture some reference footage with his GH13 and Franck stand-in Manu Järvinen. Mathieu then set to work testing color grading […]

This week brought with it a new pilot intro, footage of the voice actors bringing the characters to life, increasingly polished models and animations, and more. Watch the full weekly show-and-tell in the video right here, or just skip to the highlights below! This Week’s Highlights   A Whole New Opening Not only has the […]