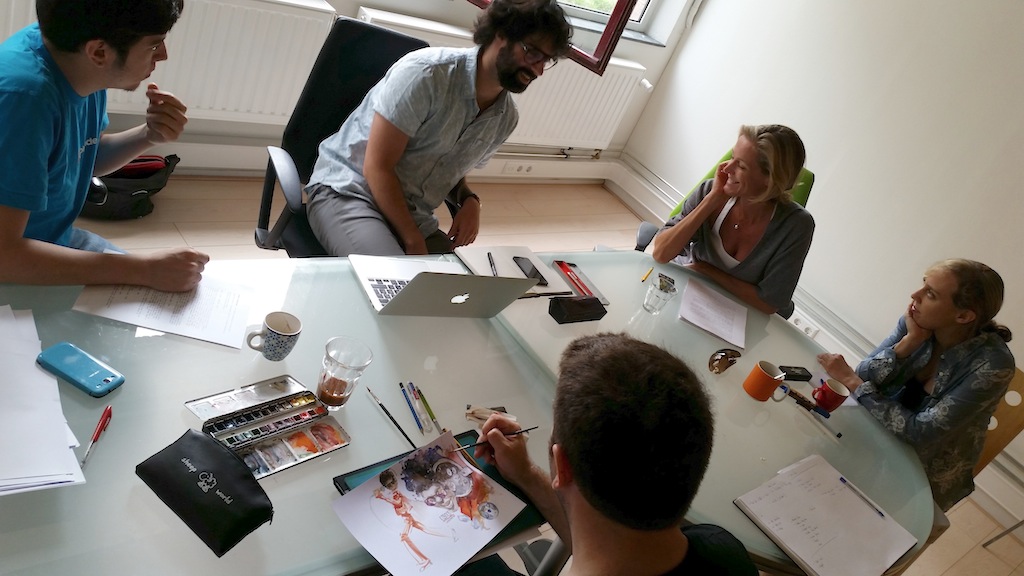 This morning the story team arrived for the kick-off. I’ve temporary rented an empty unit from our neighbors, this office has long walls that can be filled entirely with storyboards and concept art. A great place to work undisturbed from the other activities in Blender Institute – which is mainly Blender coding and Blender Cloud work right now. I know how sensitive and vulnerable story development can be. Giving the director, writer and and artists an own place might well help a lot in the end! Is the Pilot a teaser? Is it a short film? Or is it a trailer with the highlights of the real movie? Well – it’s basically all of it, more or less. That made it such a hard thing to develop and write the past months. We certainly will go for quality first – not quantity. Rather a bit short than lacking impact, sophisticated design and acting quality. But a usual – when you write it out – things get too long as well. The last draft from Esther goes into the 14 minutes already!

However, if needed we’ll involve one or more of the external units – who were ready to join Gooseberry this year anyway. This is one of the big decisions to make the coming months. We spent an hour to map out for each person in the meeting what we expect them to be contributing, and to hear them about what they’d like to do.
Pablo Vazquez: concept art and character concepts and designs
Sarah Laufer: concept art, story boards.
David Revoy: concept art, looks development, prepare for having ‘his world’ in the final film.
Francesco Siddi: production coordination, project and asset management.
Esther Wouda: writing the script, closely work with director on getting the story and characters as strong as possible Mathieu Auvray: director, having a final creative control on every aspect of the film.Ton Roosendaal: producer, make sure we all collaborate to the best of our abilities, well empowered, sticking to previously made agreements and plans – with Blender and other free/open source software, in open production – to deliver a Pilot that will help to fund our feature film.

Lined up to join as a storyboarder is Matias Mendiola, he will get a planning confirmation from me tomorrow or friday latest. Oh yes… people are feeling nervous already!
Should we already scare this script now? The characters? That important pivotal scene? The movie title? How to prevent it to become a massive energy drain that drags us down?

All of these doubts are valid and honest. We certainly will have to respect the real emotional attachment of an artist to his or her creation – which shouldn’t be ruthlessly be torn away and thrown at the wolves out there.
On the other hand we’re confident with a long past experience of sharing – which really never has harmed us or our work at all – in contrary, looking back it only worked awesome! So yes – we’ll share. And we’ll share it all. It’s just a matter of setting up the right systems here for project management and versioning. Just the first basics to share text and images, which could be just a matter of days to have working.
As promised – our supporters will get the same level of access as we do for ourselves – via Blender Cloud. But we’ll share here in the blog as well – more of the highlights, and also preventing too annoying spoilers to be published or discussed.