Campbell and Antony have been up to good things, for all you video editors out there. The sequencer has gotten a face lift! Mathieu’s made a before-and-after screenshot showing the most important changes (note that both are the exact same file!): 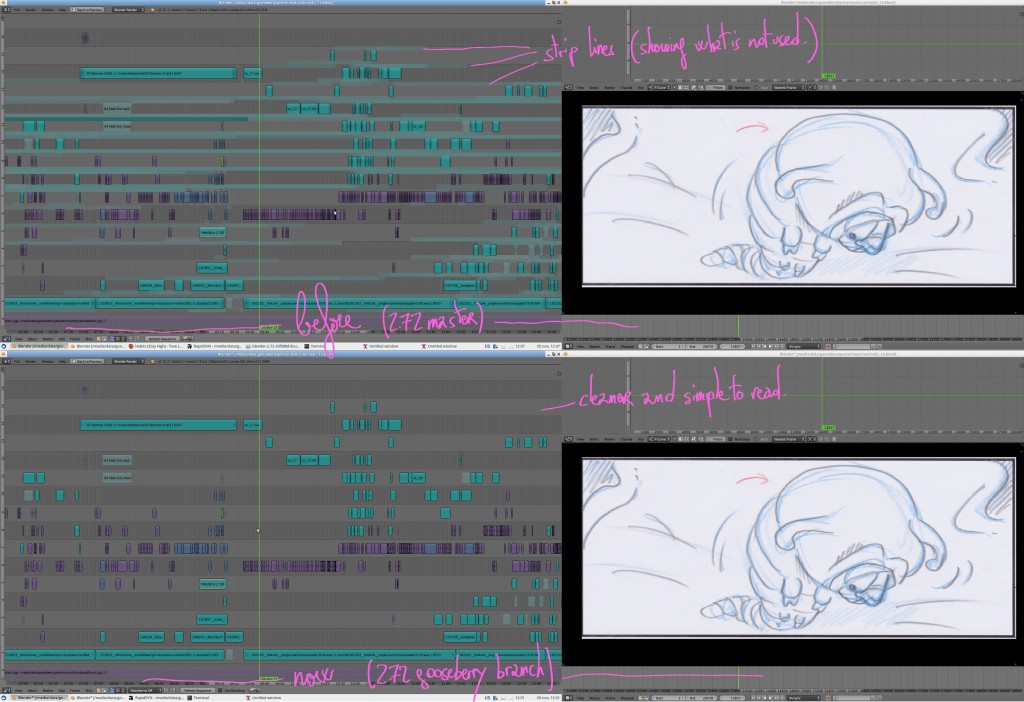 It looks a lot neater now! That’s because you no longer see the potential space remaining in each file on top of the space you’re actually using. One of the next steps will likely be to clean up the look even more by removing some of the vertical lines.

Miss the seeing the unused leftovers? You can still turn this feature on using the “Slip Strip” (just press the S key while you move the line):

This screenshot also shows another modernization: note the boxes now have rounded edges instead of sharp square corners. (There’s talking of re-implementing the flat edge between files that cut directly from one to another, but this might be a little tricky to work out, so that’s TBD.)

In addition, the new sequencer also lets you view the wave forms for each of the files with a click on the bottom menu bar:

You can also set this box to the former Strip option to view waveforms for only the files you’ve hand-selected, like in the previous sequencer, if you need to do that for any reason.

Plus, the new tool lets you turn on the backdrop, as in the compositing tool. Currently, you can only set this backdrop to full-screen format, but the guys are working on an option that will allow you to place it anywhere on the screen, like you can in compositing.

For now, the new sequencer is part of the Gooseberry branch; you can download the latest build for Linux here – thanks, Sergey! There are plans to incorporate this into the Master build as well, later…

Next week, Mathieu will make a video with the tips and tricks he’s picked up using the video editor for his own work. :-)

Video editors, what do you think of this new direction for the sequencer?