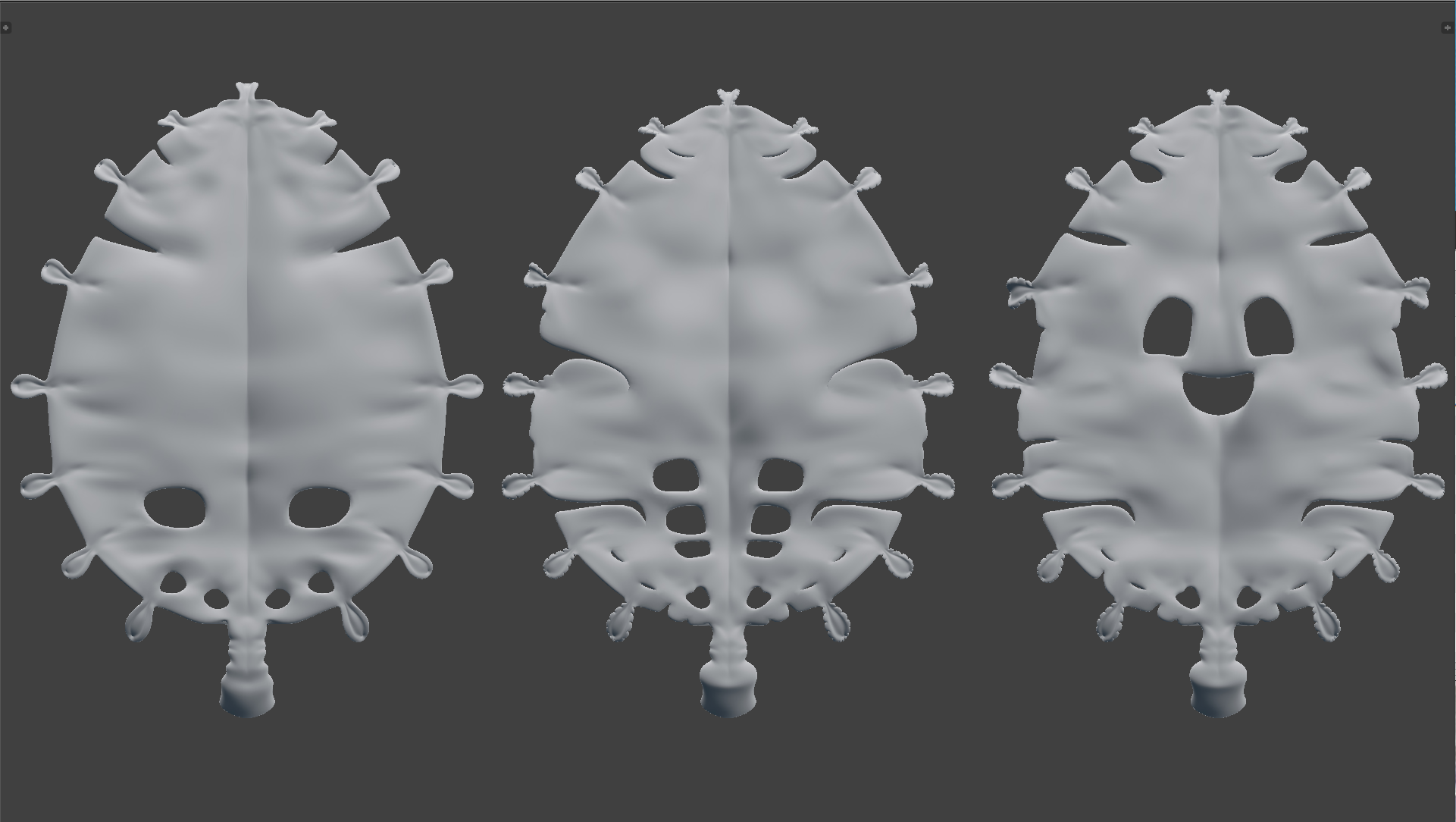 With the crazy conference period now firmly behind everyone, it’s been a busy week – and a longer weekly to show for it. In case you missed it on Friday, here is the full video of Friday’s Gooseberry weekly work round-up:

For those of you who don’t have a full hour (or who want a preview), here are…

The weekly was a little delayed this week because the whole studio (and guests) were having a viewing of the latest storyboard animatic (with a little early 3D animation) of the revised script. Gooseberry supporters can watch the whole thing (with placeholder sound effects but no music, since we don’t have the rights to that yet) in the Blender Cloud.

The story has now been cut down to 16 minutes, but more is likely to get trimmed as the animatic is realized in 3D. The animatic is intended to help shape and evaluate the overall direction of the pilot film, but don’t expect full emotional resonance (or even complete clarity) – that will come through the professional actors and the months of intricate production, animation, editing, etc., ahead.

However, if you watch the animatic you’ll notice that Mathieu has now cut most of this fall – but, with 5 falling sequences already in the pilot, everyone’s happy with that decision. Instead, expect other, more interesting falls like this one:

And just for fun…

Don’t worry, this is not the new direction for Franck. This is just what happens when old files don’t match new computer settings. Poor spido-Franck has been put out of his misery.

(Birthday girl) Sarah’s working on some different looks for Franck’s flocks – both the sheep and the caterpillars. Note that only Franck gets those distinctive teardrop-shaped eyes! 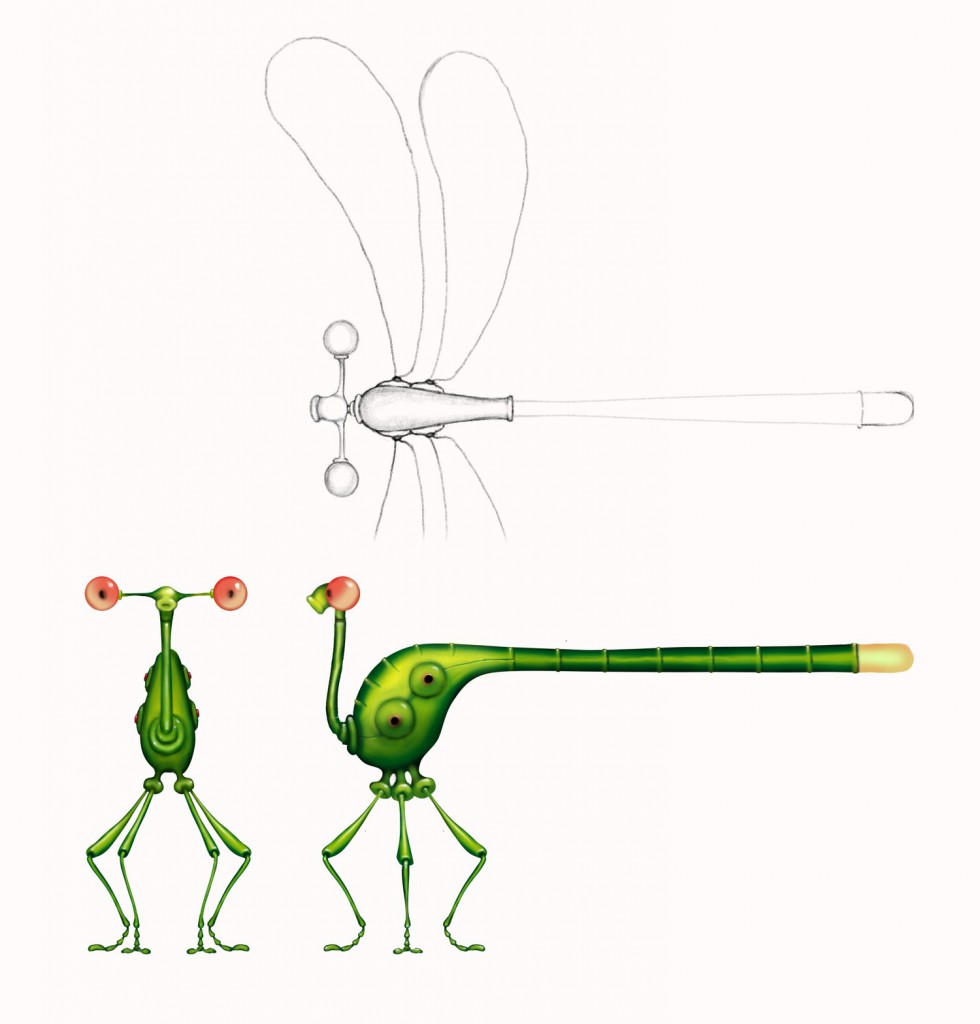 Sarah’s also finalized the designs for the dragonfly (or “motofly”) that Franck rides in his hunt for Tara.

Angela’s been busy not only modelling but also making this awesome timelapse video to show you all how she does her thing…in this case, building the dragonfly (or “motofly”) Franck rides in search of Tara.

Manu shows his stuff his first week on the job with this early model of the Cosmos Laundromat. Pablo’s begun modelling the jungle foliage, but says more research is needed to get the scene right.

Daniel shows off all the things that Franck can do, nose to tail, now that he’s fully rigged. 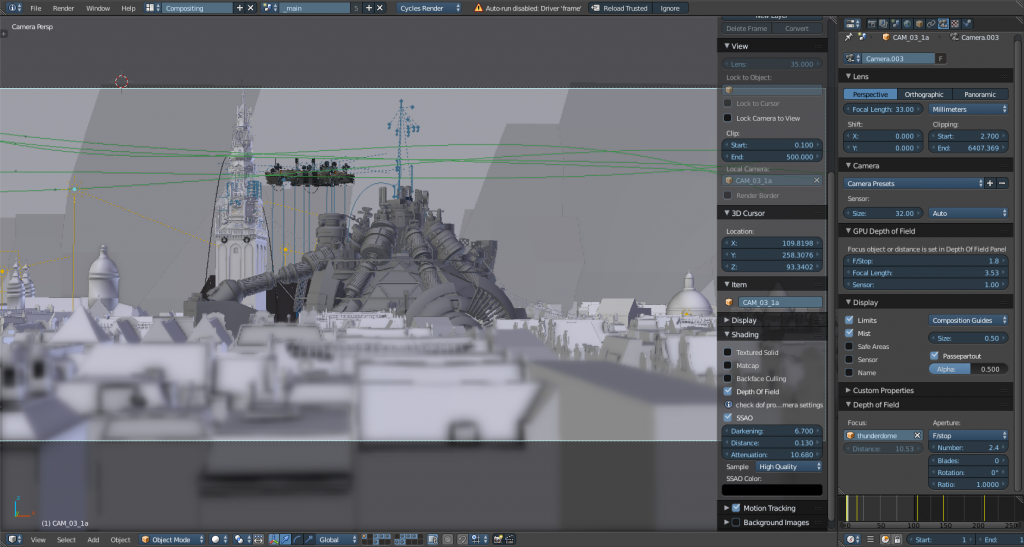 Antony’s been working with depth of field (to help direct the eye’s attention in each shot), playing both with the existing Gooseberry models as well as some old assets to simulate wider shots.

Lukas has been working on a new point cache modifier to improve workflow by offering a fixed point export or work from (see the Weekly livecast video, up top, at 30:30 for a demo).

Francesco and Campbell have, meanwhile, been working on a new asset manager for Blender. (“The best asset manager Blender has ever made.” :-P) This new tool can grab and package a set of assets, as well as check the status and replace edited assets on the server. (Full demo at 36:00 in the weekly video.) 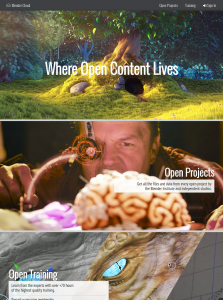 A preview of the new design for the Cloud

Pablo’s having a very busy month. After giving a talk about free animation software (i.e., Blender) last week at the Universidad de Castilla-La Mancha‘s seminar on Spain’s animation industry (which will be online soon), he’ll be heading back to Spain this weekend for Blendiberia, where he’ll be giving another talk in Malaga – this time specifically about Project Gooseberry. Everyone who can is encouraged to join – it’s free!!!

Pablo will also be representing team Blender at the Soundtrack Cologne festival, where composer Jan Morgenstern has been nominated for an award for his soundtrack for Blender open movie Caminandes 2: Gran Dillama.

Thanks also to our two guests this week from Israel’s Blackboard Studios and local academic Blender users Mattijs de Rijk and Sybren Stüvel.