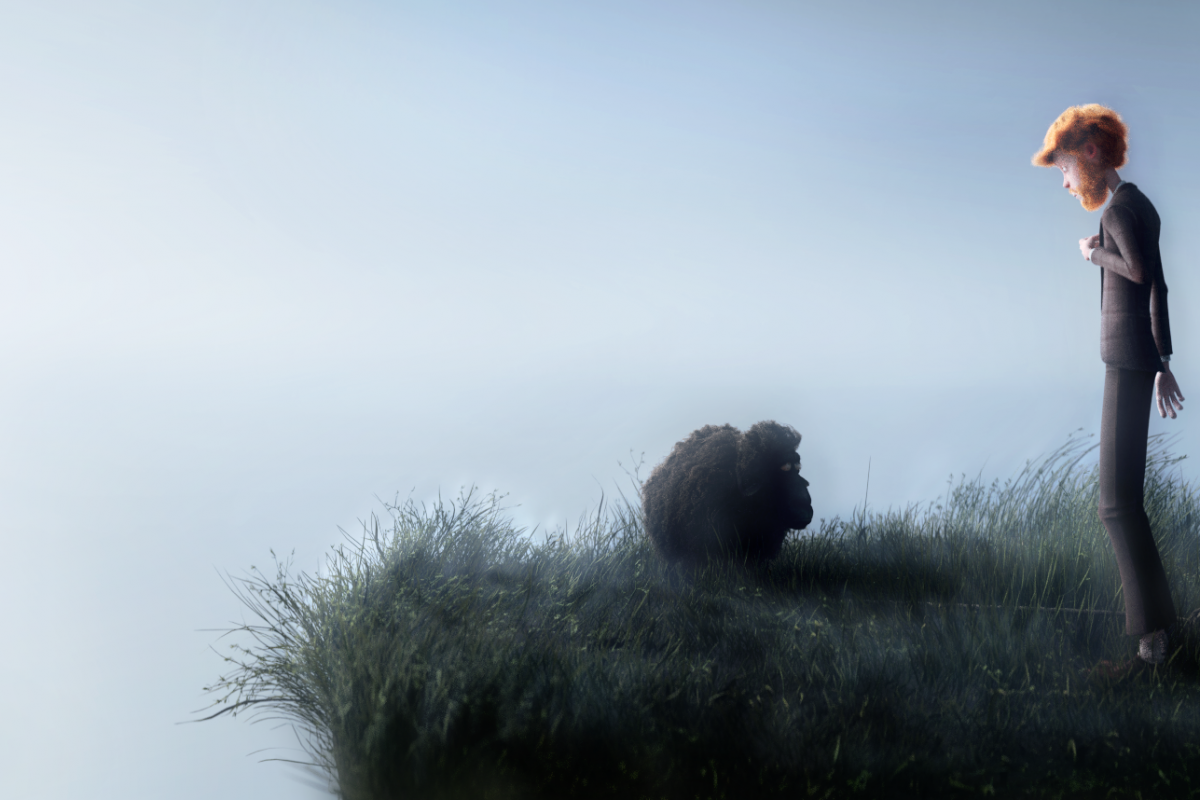 Another week has come and gone, and more progress has been made! Watch the full report (85 minutes) here or continue onto the highlights to skip to the bits you like best.

Mathieu has been working on the scene where Franck (in his sheep form) first meets Victor. In the weekly video above you’ll see his latest edit at 21:01, which prominently features live-action footage of the voice actors at work. (You can also watch it without the background noise and syncing glitches or download it for yourself in Mathieu’s folder on the Cloud.) Mathieu’s goal for the scene is to re-instate some of the mystery.

Mathieu has also been putting together the final shot list — but as of Friday, this was still changing. Manu has collected the plant and rock models he and Andy have made for the film so far, plus some more Andy made for the Caminandes films.

Using these references and the tree model Andy sculpted during the week, Manu started dressing the island set. He used group instances rather than particle instances, which means these gorgeous stills can be rendered quickly but cannot be animated. Still, the images serve as a goal for what the artists should achieve through particle instances later. Check out one of the results, also featuring Franck, below, and then head to Manu’s folder on the Cloud to see/download 7 more. Andy has, meanwhile, been working on the cliffside shot. Check out the various effects he tested on this scene in more renders (also from different angles) in his weekly folder on the Cloud.

This weekend Andy, Manu, Antonis, and Lukas took a trip to the Dutch dunes to be inspired and capture some reference footage for sheep island. Watch out for a blog post from Andy with photos and videos this week!

For fun, Manu made a clay test of Franck dragging the branch through the grass using shape keys…complete with a “rocket hair” bug at the end:

Hjalti also continued working on the opening animation of Franck pulling the heavy log. Though the rope rig needs some adjustments, he put together two tests with and without fur to get Franck’s motion right:

Want to see this animation with final fur and grooming? Head to Andy’s weekly folder on the Cloud to find a bundle of all the stills you’ll need to render your own animation.

You’ll also find Hjalti’s latest test of the closing shot of Victor in the laundromat on our YouTube channel, where the walkcycle has been added…but Victor suffers from a broken neck. Luckily Hjalti is an animation doctor and can patch our poor guy up straight away.

In last week’s weekly highlights we shared Daniel’s video walkthrough of Tara’s rig. Sarah offered him some infographic feedback — such as asking for bendier legs, more facial control and deformation, and general controls for the wings (see her weekly folder on the Cloud) — and now the rig is pretty much final. You’ll find the latest version, to play with yourself, in Daniel’s weekly folder on the Cloud (with Sarah’s added clock model). Watch Sarah’s demo at

Pablo has continued his Tara grooming, focusing this week on the finish of her skin. Trying to give her a more translucent, insecty feeling, he began experimenting with the milky shader he had been using, but got most excited about this shader created by Blender user blazraidr.

The shader created a different effect in different lighting, but really stood out when Pablo lowered the lighting to jungle-floor conditions.

Check out Pablo’s video of the shader under different setup conditions below, and then head to his folder on the Cloud to see more renders of the latest version of Tara using both shaders…and then applying the new shader to caterpillar Franck as well.


Sarah also spent the week working on Tara and Franck’s final dialogue. In the video below you can see how that dialogue has evolved over the course of the week as more and more details get animated (look at the hands, for one), plus a closer look at where it stood on Friday. Notice in the final shot that Franck’s face become slightly distorted as he’s sucked into the empty space when Tara disappears. Inspired by this new pointiness, Antonis also decided to add the opposite: a positive or negative cavity effect. Watch the video below to see how it works, or watch it with Antony’s live commentary at 1:06:45 in the weekly video.

More from the Developers

Manu celebrates the new render farm with a new logo. Download all the assets you need to recreate it yourself in Manu’s weekly folder on the Cloud.