It’s June, meaning we’re in the final stretch of the Cosmos Laundromat production. In the weekly video below you’ll see more final animations, more renders, and new art…and, of course, plenty hair sims. In the highlights you’ll find previews of and links to even more material, such as two alternative endings only available on the Blender Cloud.

See you in the comments!

Beorn has now animated all six shots of the flock surrounding Victor, which you will find in his weekly Cloud folder.

In Beorn’s folder you’ll also find a before and after of the sequence where Franck looks back at the rope (which is now one shot shorter) plus his ongoing attempt to make the rope work properly in the scene where Franck pushes the branch (pictured).

In addition to some more small tweaks to other animations, Hjalti has been working on the animations of Franck inside the storm. You’ll find both in 11 separate videos in his weekly Cloud folder.

In addition to some final corrections to the sequence where Franck learns about his timer (in her weekly Cloud folder), Sarah began working on this new shot where Franck checks out said timer. Here you can see it go through three versions, from blocking to splining. She will continue her work on this shot this week.

Sarah has also been doing a little more sim work, focusing this week on Victor in the shot pictured above. Of course the video version you’ll find in her weekly Cloud folder.

Hjalti’s also been getting in on the Victor simming action. See his work on five different shots in his folder for the week.

Manu completed his first hair sim this week. Being Manu, he documented the full process thoroughly. In his weekly Cloud folder, in addition to the sim itself and a render of the sim, you will find a detailed, step-by-step doc on how to cache yourself. (The ultimate goal of the team is to simplify this process.)

Manu has been pushing forward with more test renders, including this fresh look inside the laundromat. Find all the videos on his weekly Cloud folder.

Mathieu has also been doing some lighting tests for the tornado scene, which should be dark and dramatic but with a bit of color reflected from the storm. Check out his weekly Cloud folder for more images.

Pablo spent much of the week prepping shots and sending them to Qarnot for rendering. In his weekly Cloud folder you’ll find three final-quality shots – Franck hanging, the island from afar, and this shot – which took between 1.5 and 12 hours per frame to render. You’ll also find an updated hair sim test in this folder as well.

Andy has made a new set – with wind, grass, and randomization – that will work with all the flock shots Beorn has been working on. See 18:12 in the weekly video for a peek. Then check out Andy’s weekly Cloud folder for the animation above plus more grass sim tests to see this set in action. This week Andy would like to add more randomization. 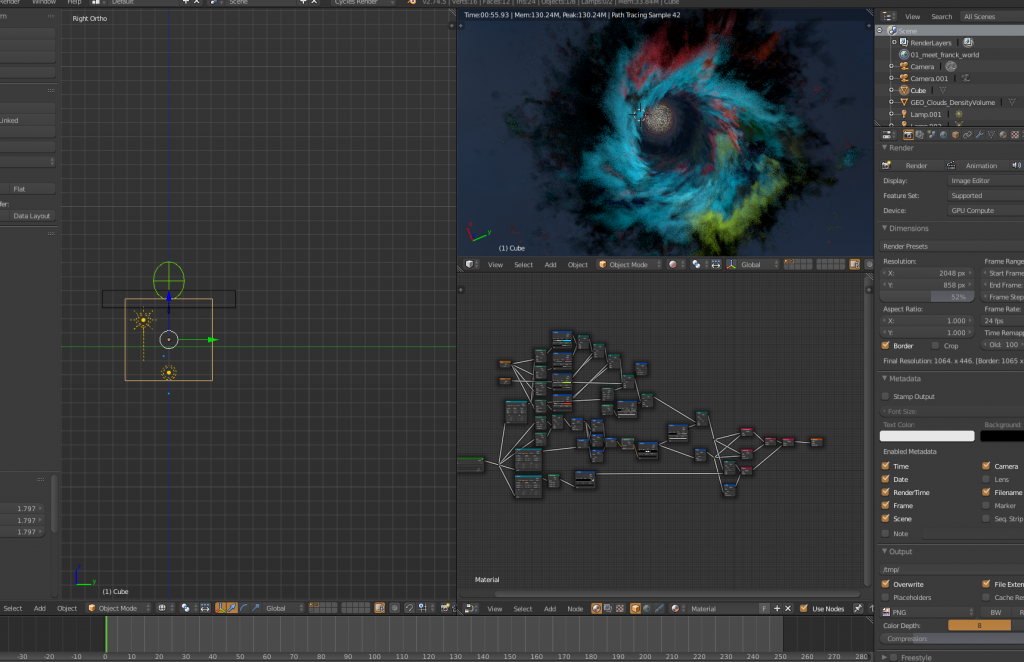 Andy has now created low-res renders for all six tornado shots, which you can see in the next version of the full pilot. Part of this included setting up a shader for the inside of the tornado (using Lukas’s particle-swirl trick), which you can see here.

Mathieu made this quick render of the benchmark image with new lighting for the splash screen, but will re-render it.

Manu has pimped Victor’s watch, which now has a cosmic background and a detailed render. Find the full-res version on the Cloud.

In Mathieu’s folder on the Cloud this week you’ll find two alternate endings for the pilot: a shorter version and a longer version that returns to the jungle for a quick look at Tara. Which, if either, will be used? Stay tuned in the coming weeks!