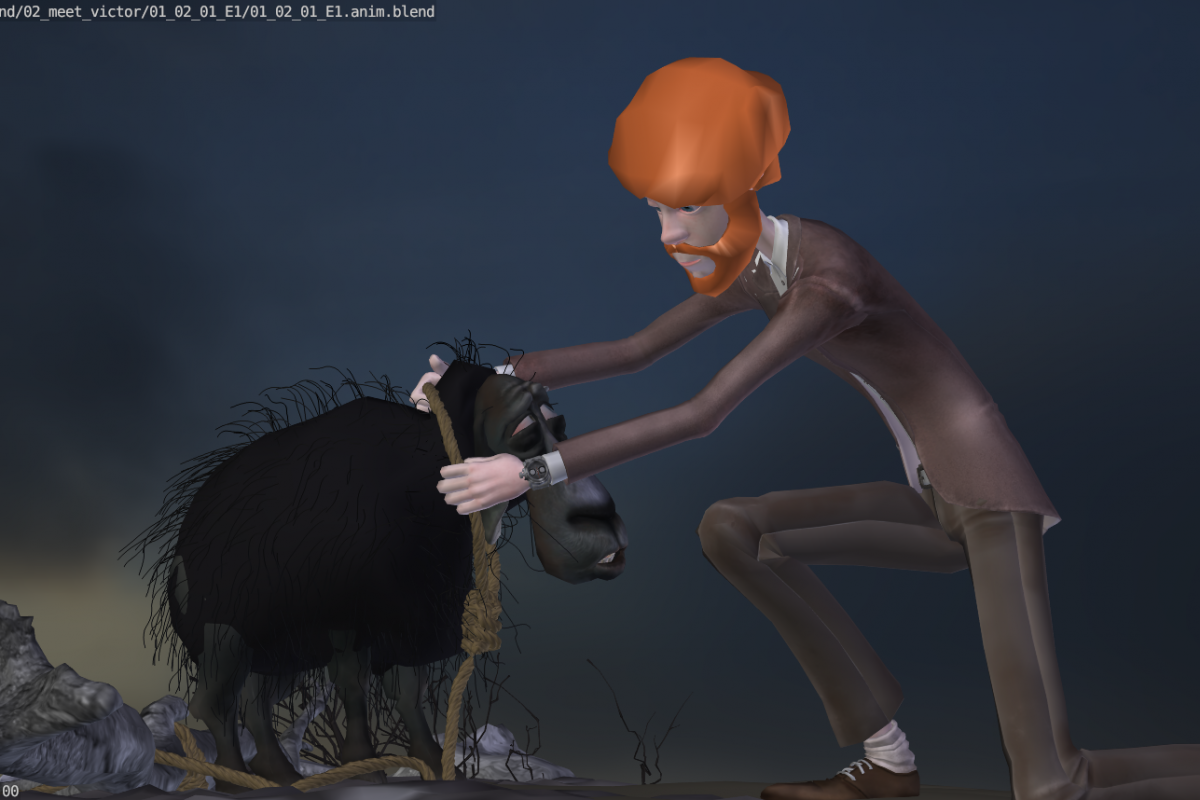 It’s Monday again! Which means it’s time to put the weekend behind us and recap how last week ended in the Blender studio. You know the drill: catch the full weekly video right here, and then continue on to the highlights for some more insight and a couple of things that weren’t quite ready in time for Friday.

Local developer and regular guest at the weeklies Martijn Berger was joined this week by Tünde Vollenbroek — Head of Program for the KLIK! Animation Festival, writer for the Dutch animation blog and NY-based Cartoon Brew, and a producer/assistant producer at Studio Pupil and The Drawing Room — plus Bobby de Groot, a freelance director and VFX artist and lecturer at the HKU University of the Arts in Utrecht.

Mathieu had a busy week: not only did he create a new edit of the film (with more of the WIP and final animations taking the place of the layout animations), but he also made a first edit for the trailer and a mock-up of a possible extra shot.

The new edit stands at 10 minutes (without the jungle scene, which would need more funding to be realized for the pilot) and features more and more of the actual animations being created by Sarah, Beorn, and Hjalti. This first pass at the trailer captures various shots from the pilot, setting them to the soundtrack of a very, very slowed down washing machine. Mathieu will work on a new cut of the trailer this week, this time with some dialogue included. The extra scene (or rather, extra view of a scene), a wide view of Franck running from and being sucked into the tornado (currently represented by color particles), will only be added and fleshed out depending on the project’s funding/how much time the animators have.

You can watch all 3 videos in the Weekly video above at 10:35 (with commentary) or download full versions from Mathieu’s weekly folder on the Cloud.

Beorn continued work on the shot where Franck reaches the cliff. The animation for this shot is now all but final, just awaiting corrections to the rope rig (which came in today, Monday). Beorn also worked with Pablo to make a proxy for the grass, so that the branch drags across the top of the strands (and not through them). See where this shot stands now in Beorn’s weekly Cloud folder.

Meanwhile, Sarah’s work on the shot of Franck pushing the branch (that immediately follows Beorn’s shot) is equally nearly complete. Check it out in her folder in the Cloud weekly folder. She would still like to work more on the facial expressions and expressiveness of Franck’s ears, but for now the shot will be put on hold so she can move on to other things.

Beorn and Sarah have also been working on 2 sides of the same shot: the opening of Victor’s first conversation with Franck. See Beorn’s work on Victor in his weekly folder, and Sarah’s work on Franck’s responses in her Cloud folder for the week. Both shots are in their blocking phase, so expect somewhat choppy movement at this stage as they figure out the rough positions and gestures of the characters with Mathieu. Sarah’s big challenge here is keeping Franck expressive and responsive (with a look that says, “I’m no fool”) without moving or looking away from Victor while he’s speaking. It’s all in the eyes.

Now that the tape-deck animation is fairly final (did you see the creation timelapse yet?), Hjalti has been plowing ahead with animating the sequence where Victor replaces Franck’s rope with a timer. This has meant a lot more reference footage! Ultimately, they recorded 20+ takes of this, trying to nail the right balance of expressiveness based on Mathieu’s feedback — and you can see several of these videos on the Cloud. In addition to the footage from last week, you’ll now find 2 more reference videos (including one with Sarah, Hjalti, and the actors) plus the initial animation blocking of this shot in Hjalti’s weekly Cloud folder. However, the timer rig needs a little work before he can continue with this this week.

Manu has been busy dressing up a series of shots for rendering. Check out the moving render of his beautifully sculpted island below, and then head to his weekly folder on the Cloud to see 3 more scenes: Franck’s big drag, 2 versions of Franck pushing the branch, and 2 versions of Victor walking away and putting on his headphones.

Lukas has been updated 2 particle systems. First, there is now caching support for hair, with each cache modifier getting its own output path so that work can be done in stages (though child hairs and dynamics aren’t supported yet). The next step will be adding a simulation on top of this. Lukas also set up a new way to generate differently colored bursts of colored smoke using a texture that defines particle color and uses the defined particles to produce smoke.

See Lukas demo both features at 4:03 in the weekly video, and download the .blend and other files you need to play around yourself in his weekly folder on the Cloud. (Just make sure you have the latest build of the Gooseberry branch!)

Andy put this second update to work immediately in his tornado building, as in this Monday update not yet seen in the weekly:

had a chance to further improve the tornado on the weekend! #cosmoslaundromat #b3d https://t.co/KsyFQaptfg

Speaking of the tornado…with this new feature, the tornado is reaching its final form. See the Vine above for the current status, and then check out this compilation video to see how this tornado has evolved over the week, in addition to the dark, swirling clouds that spew it forth.

So, things are coming along! What do you think?