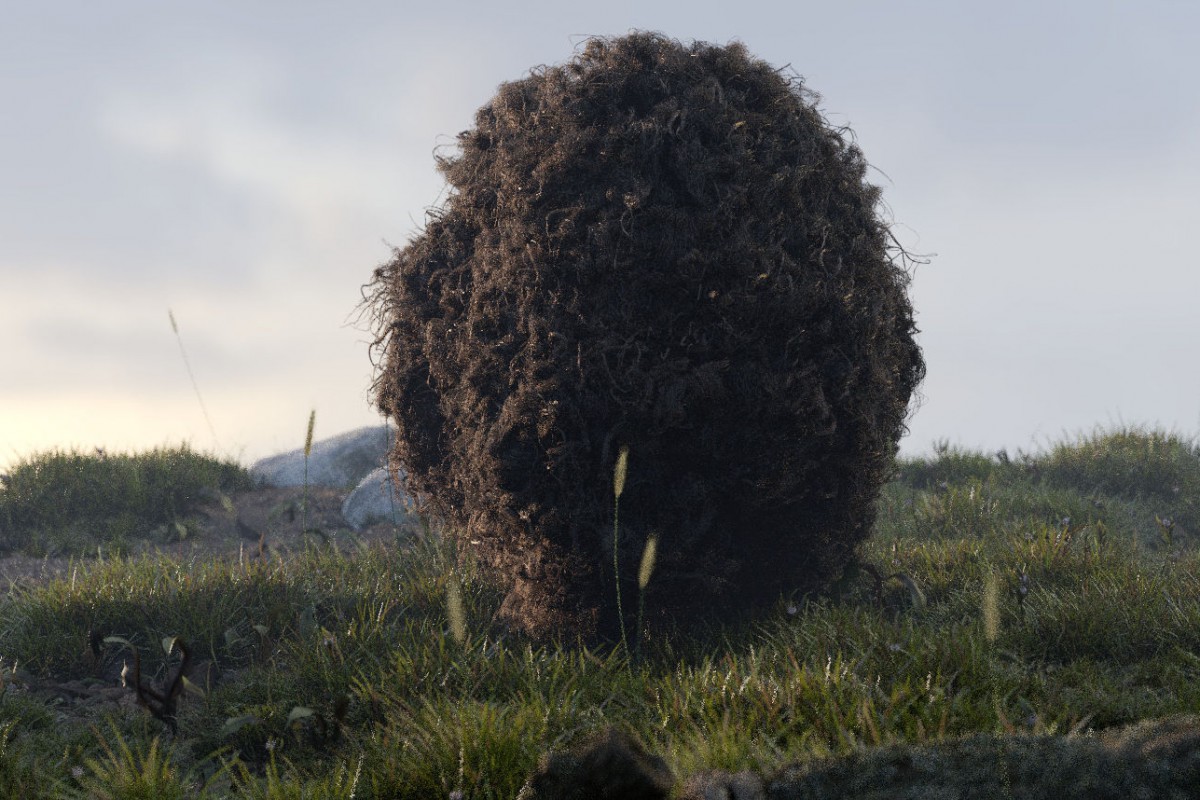 Pablo here. Sarah and I have been using our Latino powers on the jungle world pretty much since the beginning of the project. But for such a small team, it doesn’t really work so well to divide the work between two settings: the jungle and sheep island. So since last Monday the full team is going full steam ahead with the island world.

Since Sarah moved to the animation department, almighty Andy is doing some epic rainbow-sheepnado tests while keeping an eye on Manu and myself as we set up the lighting of the shots. Luckily many of the shots in the first act happen in the same environment and lighting conditions, so setting this up should be a breeze! Right? Well, think of it as a breeze in a washing machine-looking tornado with the occasional stray pair of underwear slamming into your face.

The workflow for preparing shots has been improving over the last few projects, but it’s still not something you just sit down and execute. There’s a lot of thinking and planning behind everything. Back in 2006, while working in the feature film “Plumiferos”, I learned a lot about pipelines. Some of that I brought in and implemented during Sintel and tweaked for Caminandes.

Blender’s library linking system is great, so much that it can easily be abused.

Since we are a small team, we kinda need to do a bit of everything. This is more or less how it goes: A new step we’re doing now is creating a ‘set’ file per scene. This file contains the high-resolution models and some basic lighting and environment setup. This is great for setting up files faster. Especially when you have many shots that take place in the same environment, without much change in the lighting. A copy-paster’s dream!

For example, our pipeline now looks like this:
/gooseberry/scenes/ACT/SEQUENCE/SCENE/SHOT/shot_number.variation.blend

In the shot_number.comp.blend file, we append the lights from the set file (so we can tweak them easily), as well as the world settings. We then move the lights around, do *very* minimal compositing on them — no color corrections or anything. This should look good enough out of the box. It’s very tempting to go and add a vignette, bloom, lens distortion, or give it a nice look using color management tools, but that’s for later.

And that’s it! The shot is ready for the farm! …Only to find all kinds of weird glitches that need further tweaking (or even need to be fixed in Blender’s code). But that’s OK, that’s why we make open movies after all: to improve Blender.
What about simulations, you may ask? That’s yet to be solved. But this should be done somewhere after the animation phase, using mesh cache information (Alembic). For the lighting team, this would mean we bring in the caches instead of the actual character/proxy. Not much changes in terms of the pipeline. If it looks good without simulation, it will just be awesome..r once simulated.

As much as possible, anyway. Making things local is OK, but keep in mind that if something has changed in the original library, you need to migrate those changes. Say you textured a rock, quite generic, but for a specific shot you need it to be slightly different. In this case you can make the rock local and tweak it to be awesome for that shot. But! If the art director decided all rocks should be now pink (great choice!), then you have to manually adjust the copies of that rock. So it’s better make things local only when you know they are at least 99% considered final.

2. Use overrides when you can.

It’s only a matter of making the rocks pink? Python is your friend! Leave your mouse over the setting you want to change and the tooltip should display a Python path. Go to the Python Console editor (Shift+F4), type in that path, and change it to whatever you want. It’s easier than it sounds; check out this 12-min tutorial (which I made it some time ago, but is still relevant since this part of Blender hasn’t changed at all):

If you read up to here and are totally confused, that’s to be expected. It can get complicated! Hopefully, however, this small wall of text is helpful for those wondering how we do things over here. Feel free to ask questions or share your experiences in the comments below.

Have a nice day/night!
Pablo