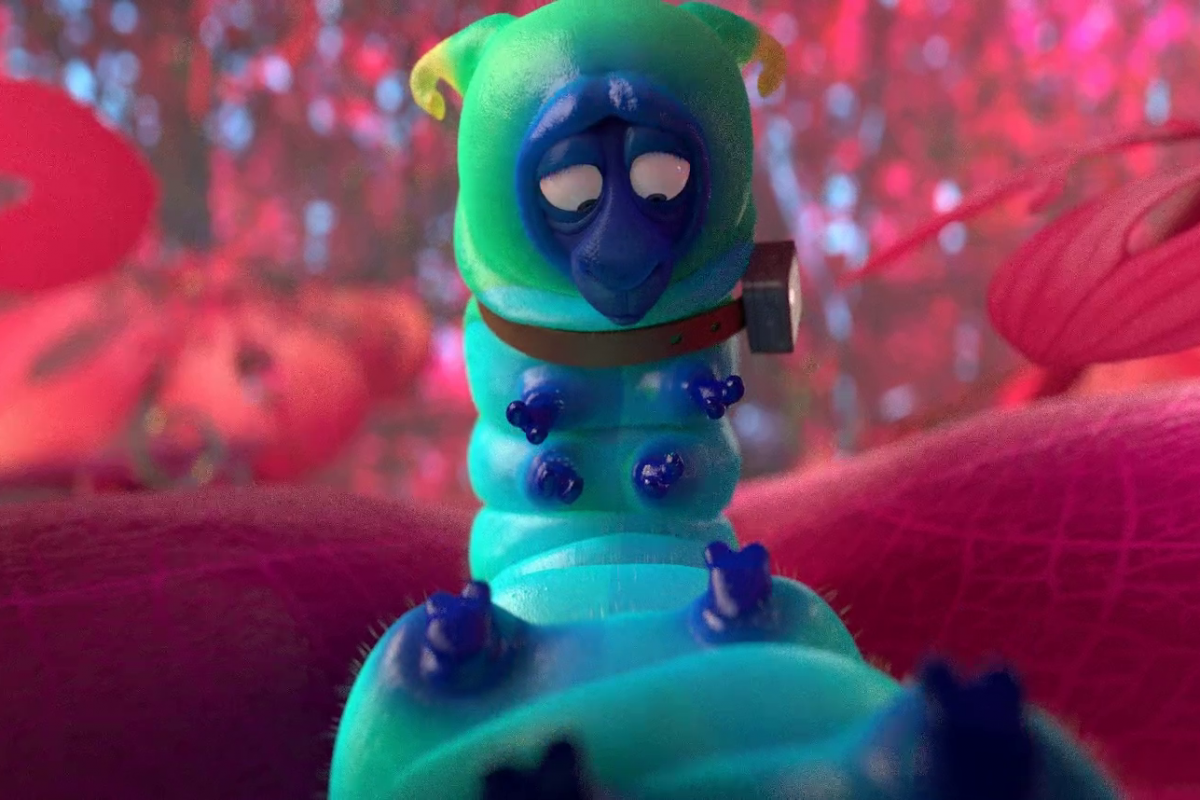 Here are your highlights for the penultimate weekly livecast of the Project Gooseberry Cosmos Laundromat pilot production. The animations and sims are almost finalized and the final renders are in the making. Plus, there’s a new and improved edit of the film with early sound editing and lots and lots of renders added. Check it all out below and on the Cloud!

This week saw three guests in the studio: Sandra, a scene designer from Germany and Andy’s better half; regular guest Martijn Berger; and Erik van Schaaik, a prolific Dutch TV-/filmmaker with a huge resumé under his belt — including (stop-motion) animation shorts and feature films as well.

Erik is returning the visit after some of the Gooseberry team visited his Pedri Animation studio back in February:

There is a new version of the film in Mathieu’s weekly folder on the Cloud! Almost all scenes are now rendered to some degree: low-res, high-res, or as a preview. Now there is also sound editing for the first 5 minutes — hear Franck’s hooves hit the rock, the branch scrape across the grass, etc. This sound isn’t properly mixed yet, though, so expect a more refined balance to come.

Next to this, Mathieu focused this week on lighting the tornado scene plus shader and motion-blur tests. This shot shows Franck without the surrounding tornado. You can find 20 more of Mathieu’s test shots (most with the tornado) also in his weekly Cloud folder. They are almost final, but the lighting still needs to be refined in some to reflect more the colors of the tornado.

Sarah has continued working on the second jungle shot this week. Last week you saw it in blocking, but now it is splined and much more advanced. Plus there is reference material of Sarah playing a caterpillar. You’ll find it all in her weekly Cloud folder. 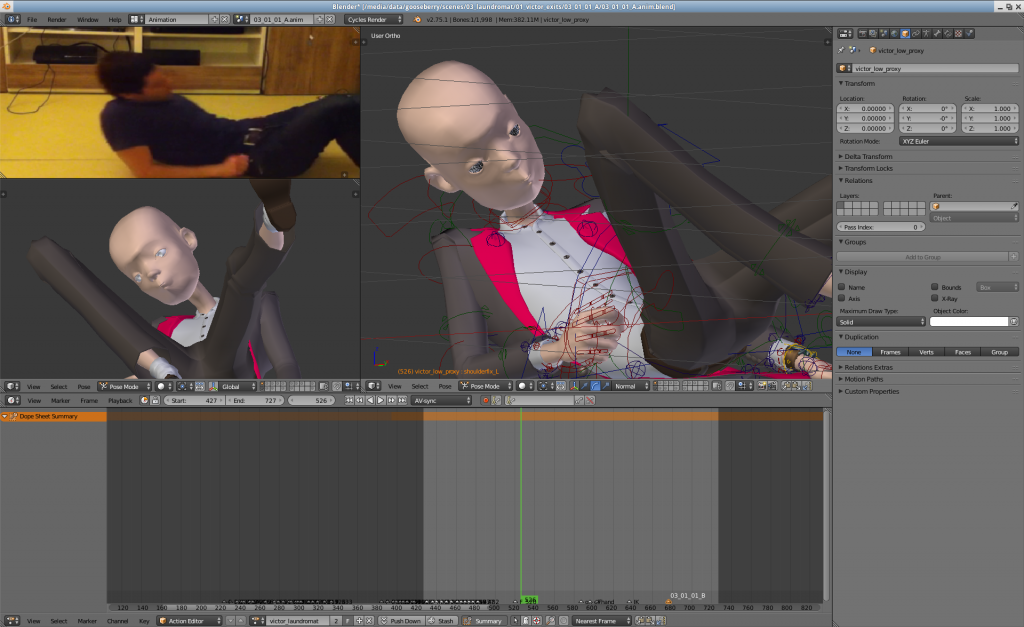 This is what happens when your character’s jacket was made for only minimal animation…but you try to give it more life anyway. I.e., Edit Mode breaks the rig. (You can listen to Hjalti’s full explanation of what went wrong at 25:58 in the livecast video.)

This jacket tweaking was part of Hjalti’s ongoing work on the laundromat animation. [SPOILER ALERT] You’ll notice Victor now emerges from the washing machine wearing the headphones he put on on the island…adding continuity, but also a little extra complexity, to this sequence. Check out the latest version, plus an alternative version from another angle, in Hjalti’s Cloud folder for the weekly.

And guess what? Hjalti added a pocket! Since it’s too late to update the rig (see the Alien Victor image above), Hjalti created a patch of cloth with a rig and added it frame by frame to the animation. You’ll find this animation on the Cloud as well.

Andy is still deep into the smoke simulations for the tornado, trying to make the interaction between the washing machine drum and the sky more believable, get the colors and swirls right, etc. He also spent a lot of time on the scene where Franck is picked up by the tornado, making sure the storm “chases” Franck and picks him up convincingly and make sure it looks like a vortex tube when you look up.

Andy has also continued his quest to get the grass to move realistically in the wind.

Beorn has been working on the hair sims for the 8 flock shots – aka the awesome suckers of memory and computing power. Check out how far he’s gotten in getting those woolly sheep locks to wave in the wind in his weekly Cloud folder. He will continue working on these shots this week to make sure there is consistency in the intensity of the wind, etc. Then the team needs to figure out how to render all this flocking wool… 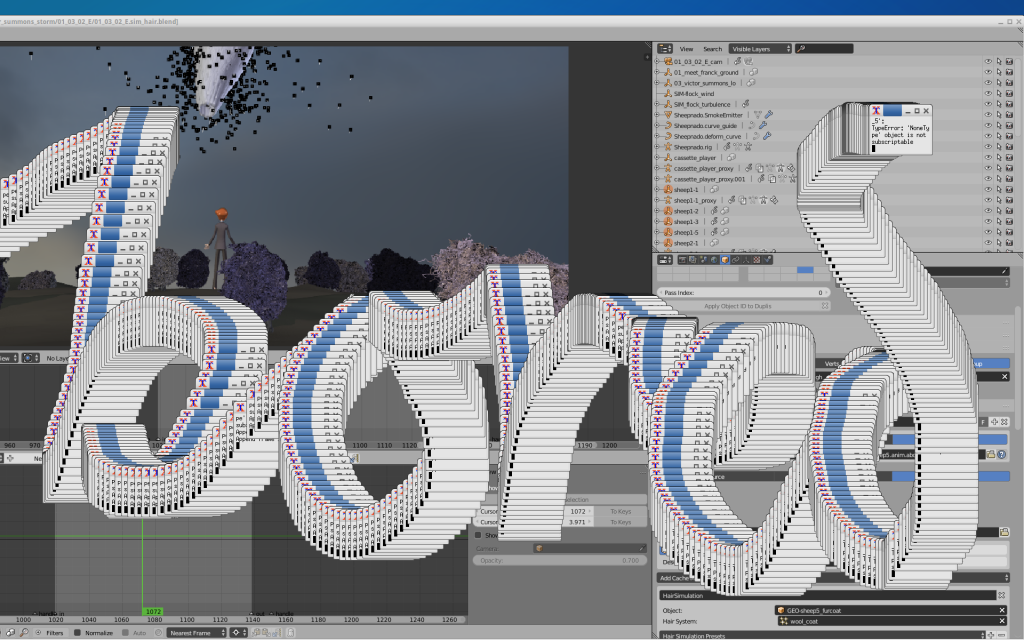 Did we mention that this caching/sim stuff completely takes over/freezes up your computer?

Manu’s second-ever fur sim can also be found in his weekly Cloud folder. With his now increased experience, Manu has updated his caching how-to doc, and you can find the updated version in this folder as well as a comparison of the changes.

Manu has now rendered a couple of the animated shots he was working on in super-high quality. You know where to find these sweet almost-final shots: in his weekly Cloud folder.

In Manu’s folder, you’ll also find a preview render with more lighting tests of the laundromat. Plus a bunch of high-res still test shots, like the one above. Note that the washing machines are back to the more subtle colors…and you can glimpse colorful tornados inside of them. Plus you’ll see a variety of other changing details, like the pipe on the back wall…

See more final frames from the opening shot the film, with and without motion blur, in Pablo’s weekly Cloud folder.

In Pablo’s folder you’ll also find new renders of caterpillar Franck with new UVs and shaders, etc. After adding these, he then fixed the geometry manually, fixed and cleaned the files, making sure they were named correctly, and more. In his folder your’ll even find a WIP animated render of Franck (with bubbles!) not seen in the weekly livecast.

See you on Friday for the last weekly livecast of the Cosmos Laundromat pilot production!