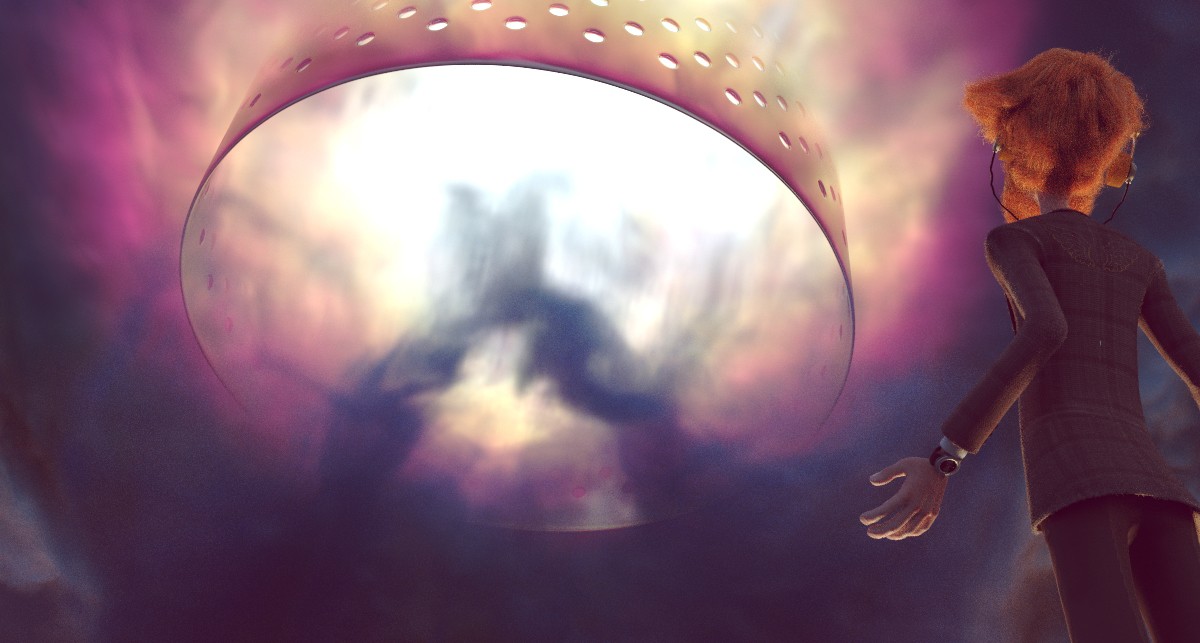 From Oculus vision to new animations to a new caching system, this week’s round of show and tell was even cooler than usual. See for yourself in the full video here, and then continue on to the highlights for a closer look.

In addition to week-long studio guest Dalai and regular weekly guest Sybren, this week also featured another mini-reunion: this time with Andy’s studymate from the College of Arts & Design in Karlsruhe, Germany, Blender user Oliver Jelko, and his girlfriend Nelly. We also had another guest from even farther afield: Erik Day, who teaches Blender at the University of Northern Georgia, was in town for the Holland Animation Film Festival in Utrecht and managed to squeeze in a visit to the Blender Institute in Amsterdam.

This week Mathieu put together two edits of the film:

Watch both in his weekly folder on the Cloud. You’ll also find, just for fun, HDR panoramics of the Gooseberry crew on coffee break at the Blender Institute! Now that Flamenco, Blender’s new rendering system, is out for testing, we needed something for people to test. Enter the new benchmark file! Ton shared all the details in his blog post about it Friday, and many of you have already been putting your systems to work testing it. Thank you!

Here are some preliminary render times on the various machines tested:

Gabriel also created a new add-on that lets your prioritize renders. (Check out his weekly folder on the Cloud for more testing feedback and glimpses of the interface.) The next add-on will allow renderers to select which renderfarm they will use.

While in the office working on the Multiview/stereoscopic 3D project, Dalai had access to the perfect image for a little Cosmos Laundromat testing: the benchmark file! So what did he do with it? We’ll let him show you himself…

Want to recreate this at home with your own Oculus, another VR or 3D device, or just a plain ol’ pair of 3D glasses? In Dalai’s weekly folder on the Cloud you’ll find both top-bottom and anaglyph versions of 1) the image from near, 2) the image from far, 3) a fisheye of the image, and 4) another perspective.

Plus, just for fun, the world inside the washing machine: As for the Multiview project itself, expect a commit in the next week or so!

Beorn has been making progress on animating the scene where Franck reaches the cliff, though he is still fighting with the rope tension and weight of the branch and will need to keep polishing. See how it looks now in his weekly folder on the Cloud.

Sarah has continued her animation work on the scene that follows this, where Franck’s interrupted by Victor. In her weekly folder on the Cloud you’ll find 3 versions: Franck without fur, Victor alone, and both characters together (with fuzz). She has now moved from blocking to splining, but she will need another week to get the details right.

Hjalti spent much of the week animating the sequence where Victor inserts the cassette into the tape deck. In this video you can see the many versions he’s gone through, the changes he’s made, and where it ended up:

Expect a timelapse tutorial from Hjalti this week showing what exactly he did during this process.

Finally, Hjalti and Sarah have been doing a little acting for another one of their patented reference videos — this time for the sequence where Victor removes the rope from Franck’s neck and replaces it with the timer. You can find the full video in Hjalti’s weekly Cloud folder, but here’s a little image preview: Setting Up the Shots

The renders aren’t yet ready to be finalized, and are certainly noisy for now, but thanks to Pablo’s lighting and other setup skills, the sequences where Franck reaches the cliff (Beorn’s animation) and where we see Franck over Victor’s shoulder (see image here) are starting to look like real animated scenes! Check them out for yourself in Pablo’s weekly Cloud folder.

(Read more about how Pablo works with the animators in his blog post from last week.)

Manu has, meanwhile, been doing the same for 2 other sequences just before and after Franck reaches the cliff: Franck pulling the branch and then pushing it with his head. You’ll find the latest (not yet finished) versions of these 2 sequences in his weekly folder on the Cloud.

Manu has also been perfecting the model of the island. Check out the before and after (and then head to his weekly Cloud folder to see all the steps between): Beginning of the week End of the week

Still left to do: add the flock and other random things spotted on the island.

If you’ve been following the recent progress of the project, you won’t be surprised to hear that Andy spent his week concocting colorful tornado experiments. See them all collected here:

As you can see, the watery vortex at the tornado’s core has disappeared. While the tornado will still be heralded by some dark, ominous clouds, the tornado itself will be made by colorful sparks that come together in a smoky swirl.

More from the Developers Lots more to do this week!!!