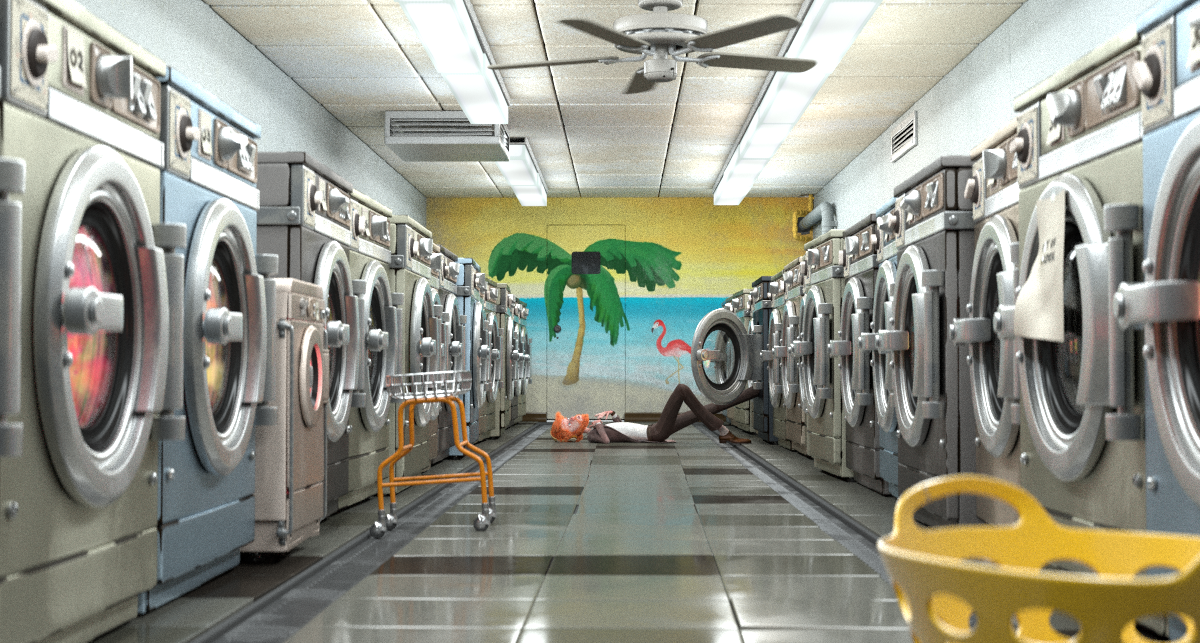 Welcome to your last weekly write-up for the Project Gooseberry pilot production! The animations are final, the edit is all-but, and the final renders are underway. You can check it all out below in the livecast video and the highlights. Then continue to watch this blog, the Blender Cloud, and the Gooseberry Twitter, Facebook, and G+ pages for all the Cosmos Laundromat-related tutorials that will be coming your way over the next month!

In addition to Martijn and Sybren, and Sybren’s wife Marit, this week we were joined by Hizkia Subiyantoro (better known in the Blender community as HizaRo) and his wife Chonie, the couple behind the largest (open) animation community in Indonesia, including the Blender Army. Since they were in Europe to present the film they are working on (about the truck drivers and entertainment district of the Roda Pantura on Java Island) at the Annecy Animation Film Festival in France, they decided to swing by Amsterdam to join the Gooseberry project’s last weekly presentation.

Our director Mathieu spent his last week in the Amsterdam studio working on shots, tweaking lighting, and working with Andy on the tornado (see “Super Sims” below). Starting this week, he will be doing his final film and sound editing from his hometown: Paris. Check out some pics of the team saying goodbye with Champagne and a viewing of the film to date in today’s other blog post.

This was the week of fighting with the cable from Victor’s headphones. First Beorn made sure it would wave in the rising wind as the tornado appears. (Head to his Cloud folder for this week to see the animation.)

Then Hjalti spent the weekend painstakingly animating the cord in the laundromat scene, frame by frame. You will find the final animation, more advanced that what was shown during the weekly livecast, in Hjalti’s Cloud folder this week. Note there is also more jacket movement (which Beorn has continued to work on this week) plus a new ending as Victor realizes, oh shit, the timer is going off! (SPOILER ALERT: Never lighting his cigarette…ahem.) On the Cloud, you’ll also find a reference video for this final shot, featuring Hjalti in what Ton calls his “Mission Impossible” shot.

Sarah completed her final animation for the project: Franck waking up in the jungle. Note that the leaf now moves a bit, too. (See it in her Cloud folder for this weekly.)

Beorn then wrapped up the animation of this jungle sequence (i.e., the spin-out) and added flittering dragonflies to the background of all the shots. You can check out this sequence in his weekly Cloud folder.

Who likes colorful tornadoes? Good, because Andy has been working more on them. He’s added swirly clouds to Victor’s summoning, worked on Franck’s first view of the storm from below, and matched these two shots for continuity. (He also did another quick grass-sim test and fix.) But really he spent most of the week working on the sim where Franck gets picked up. See how he’s progressed, in low-res animated renders, in Andy’s Cloud folder for this week.

Beorn also finished the hair sims for the sheep flock shots — now with more wind for more uniformity! The tricky part will be rendering all this sweet, memory-sucking hair-sim action. Of course you’ll find these windier sims and animations in the usual place.

Manu has been working on the sims of the colorful tornadoes in the machines, testing and adding that characteristic washing-machine shake. Visit Manu’s weekly Cloud folder to see these sims in action. There you will also find a new laundromat render from this weekend with color reflections from the machine storms. Hello, motofly! As mentioned above, the dragonflies are back, teasing the action longtime followers know will follow in the next chapter of Cosmos Laundromat. Beorn has added new shaders and textures to the model. (You’ll also find a version with the jungle backdrop on the Cloud.)

As the caterpillar’s belly wasn’t originally going to be seen, not much work had gone into the grooming of that part of him. Sarah started out by smoothing out the seam running down the middle of it. She then added more veining, and then more spots. See each step in her weekly Cloud folder. This is still a WIP! 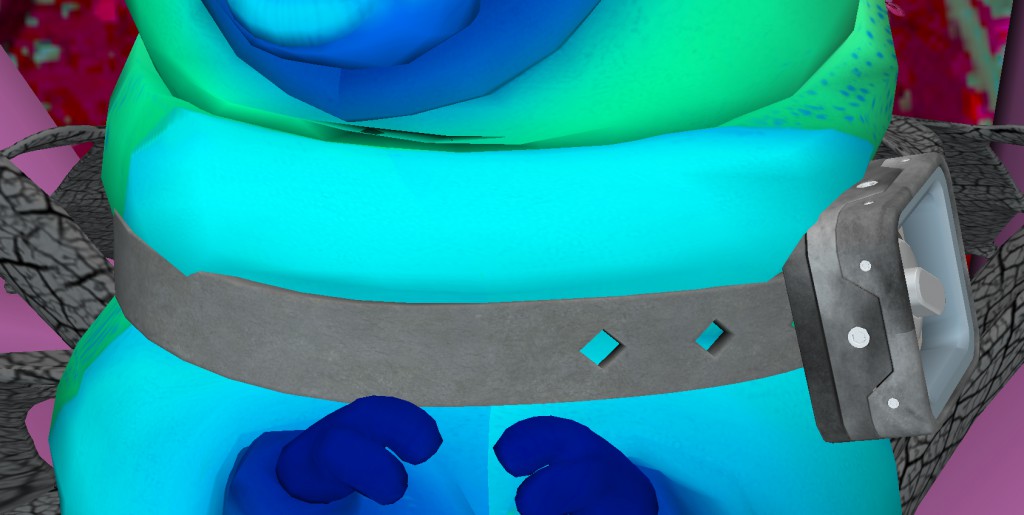 Meanwhile, Manu has transferred the texture from Franck’s timer belt to his caterpillar form.

Remember Sarah’s fantastic trees and foliage from November and February? It’s time to work them into the jungle scenery. Sarah has created a new jungle backdrop, using Andy’s splash-screen creation as a color guide, by adding leaves to the trees one branch at a time to create a mix of 4 different trees.She then added more leaves and reflection to the forest floor, going on to use these elements to dress the jungle set. See 4 more shots of her process in her weekly Cloud folder. (Sarah is still continuing to add details now.)

Pablo has been working on the lighting and details for the jungle shots, trying yellow grading and adding bubbles, etc. In these shots, found in Pablo’s weekly folder, you can get a closer look at Sarah’s jungle work as well! Including a rendered version of her final animation (without the dragonflies here). 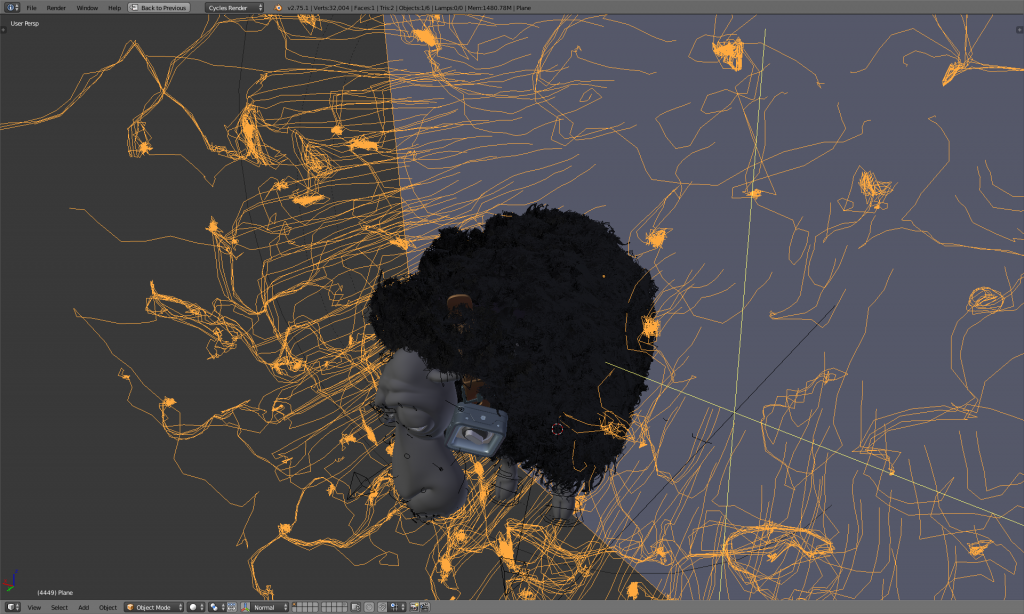 The fully rendered final film will be coming your way late this summer. In the meantime, see you back here for fresh tutorials and more from the Gooseberry team! 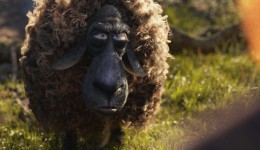